Your go-to guide to stylish and successful business writing

Good Writing Is Good Business is a comprehensive guide for the    modern business writer eager to master the skills of effective business writing. It’s also a great choice for  instructors looking for a course textbook or a supplemental resource.

“Whether you’ve picked up this book to find ways to write more efficiently or more eloquently, to freshen up on grammar and punctuation rules, to resolve some of the issues highlighted in the anecdotes above (and there are more anecdotes scattered throughout the book), or to acquire some editorial tools that will make revising easier, you will find the help you need to hone your writing craft. Business writing is only one medium of communication, but it’s an important one, and for many of us, it’s our primary one. It’s a medium that demands commitment to quality.

The quality of your writing speaks volumes about you. The way you write is one of the fundamental ways you establish your identity, especially in the electronic age when many people know you only through your writing. If you write well, you identify yourself as thoughtful, smart, coherent, and empathetic: you value the readers’ needs and try to meet them. By showing respect for your readers, you gain their respect. If you write poorly, you identify yourself in less flattering terms, and their respect for you will certainly diminish.

Peel away some of the mystery from writing and achieve your desired results. Maybe it’s about showing empathy in your email for someone who just lost her job. Maybe it’s about writing an elegant executive summary or a successful proposal. Maybe it’s about realizing your ambition to move into management. Whatever your reasons, I hope this book, Good Writing Is Good Business, will become a trusted companion.”

This book will help you 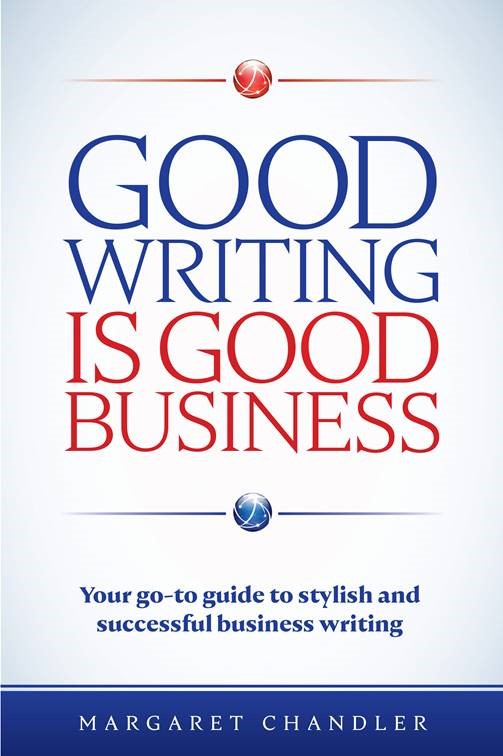 Now that you’re equipped with Chandler’s Laws, let’s turn our attention to some myths—actually, more like complaints—that I hear constantly. Let’s bust up these barriers to good writing, once and for all!

Myth No. 1 I have to memorize all the rules.

Response No, you don’t. A chef doesn’t have all the recipes in her head, but she knows where to find them. Even a professional editor doesn’t know all the rules; that would be impossible unless he were some kind of encyclopedic monstrosity. What’s important is that you know how to frame the question, and you know where to find a reputable answer. This means that you haven’t just googled the question, muttered abracadabra, and hoped for the best. You can stand out from the crowd by resting on the shoulders of authorities and not on the flimsy props of amateurs.

Myth No. 2 Standard rules exist that all teachers, grammarians, and other language nerds use. I just don’t know them. (This rule is a variation of Myth No. 1.)

Response Truth is, disagreement and discord abound. English is a language in flux, spoken by people all over the world, with no academy as a guiding—or some would say limiting—force. Even language scholars often disagree about correct usage, which is why writers need to make their own informed choices based on good resources.

Myth No. 3 I can’t write. I’m not a natural-born writer. I’m hopelessly inefficient. My work comes back covered with so much red ink that it looks like the Red Sea. I’ll never improve!

Response How much time do you dedicate to your writing practice? If you practised piano randomly a few times a year for an hour or two, would you expect to be a good player? If you don’t practise, don’t have good resources, and don’t know what you don’t know, then, yes, you’ll probably continue to flounder. You may never win a prize for business writing—and take comfort in knowing that there isn’t a Pulitzer Prize in this category anyway. But if your expectations are in line with your commitment, you will progress. The story goes that one day violinist Mischa Elman was leaving Carnegie Hall in New York by the backstage entrance when he was approached by two tourists looking for the main entrance. Seeing his violin case, they asked, “How do we get to Carnegie Hall?” Without looking up, Elman replied, “Practice.” Whether you’re hoping to play at Carnegie Hall or to perfect the art of the written word, it all comes down to one thing: practice.

Myth No. 4 You can’t teach an old dog new tricks. I’ve been writing this way for a long time, and I don’t plan on changing now!

Response Don’t let yourself fall into this trap. For starters, you’re not a dog. Let’s say you’ve just found out—perhaps while reading this book—that there is one space after the period at the end of a sentence and not two. Despair not! Just accept the truth, and before you send out your documents, do a find and replace. Eventually, one space between sentences will become natural.

Not believing in yourself and your potential to adapt is an instant door slammer. Open the door and step through!

Did you know that a professional editor can prune many documents by about 25 percent—and maybe even more?

Why make it so easy for editors? Why are so many writers more adept at padding content than pruning it? For many of us, inflating our language begins at school with an assignment like this: submit a 10-page essay on how robotics has revolutionized medicine. Problem: you have only seven pages of content. Solution: inflate content to meet page count. A wise teacher—gazing into her crystal ball and seeing you 15 years later as a popular science writer—would have advised you to write what you know and then stop. In the real world, however, we seldom receive such sage advice. Instead, away we go, stuffing more words in, sentence by sentence, intent on word quantity rather than word quality.

But the business writer’s audience is not a teacher who must read his students’ submissions. The audience is a motley crew of the motivated and unmotivated, the curious and incurious, and the sophisticated and unsophisticated. This audience isn’t expecting a pre-determined page count. They’re expecting a clean and lean message. Unfortunately, by the time we begin our careers and find, sometimes to our surprise, that much of our workday is taken up with writing, we have some deeply ingrained bad habits.

We can’t, however, blame it all on our education. We binge on words, our sentences losing their natural shape and rhythm in the process, for many reasons. Interior dialogue, fine in a first draft, doesn’t get removed. Simply not knowing any better is also part of the problem. We assume that pompous and inflated language must be the correct way to write because we see it everywhere. And sometimes we don’t make the effort because removing what Lanham calls “the lard factor” takes time. One final culprit could be that we don’t have much to communicate, and we pad our words in an attempt to hide this from our readers.

Let’s play devil’s advocate for a moment and consider whether we lose something when we write less. Some writers are afraid that pruning can lead to an excessively sparse tone. But it doesn’t have to be so.